The next recession is, most experts agree, going to be different from the Great Recession in terms of its impact on the US housing market.

While the financial crisis of ten years ago was fueled by the overinflated housing market, that is not typically a cause of recession and is unlikely to be a cause of the next recession, or a major victim, according to Redfin.

"Home prices are high right now, but they're high because there's not enough supply to meet demand, which means there's not a bubble at risk of bursting," said Redfin chief economist Daryl Fairweather. "Most of today's financed homeowners have excellent credit and a cushion of home equity, making them unlikely to default on their mortgage even if their weekly grocery bill grows or their stock portfolio shrinks in the next recession."

The stats show that the past 5 recessions have not seen large declines in house prices with the exception of the Great Recession:

Fairweather says that a recession in the next 2 years is likely to be caused by the global trade war, with those in exporting industries such as automotive and agriculture most at risk.

Workers in those industries may see layoffs, leading to increased mortgage defaults.

“And would-be homebuyers won't feel so confident about making a big purchase when they don't feel confident about their job security or their financial wellbeing,” he said. “That could cause declines in home prices in markets whose economy depends on global trade, but home prices nationwide are likely to hold steady."

Markets most at risk in the next recession
Redfin says that the metro area with the highest risk of a real estate dip during a recession is Riverside, California, with an overall score of 72.8%, followed by Phoenix (69.8%) and Miami (69.5%). 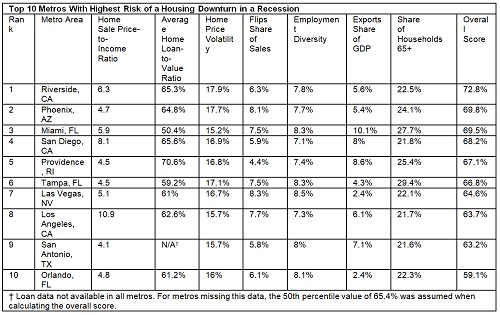 Least at risk in the next recession
The metro area with the lowest risk of a real estate dip during a recession is Rochester, New York, with an overall score of 30.4%, followed by nearby Buffalo (31.9%) and Hartford, Connecticut (33.9%). 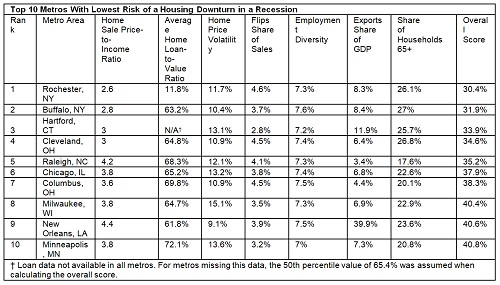