The time of year plays a big part of your home buying options, regardless of the particular housing market where you want to live. For many prospective buyers, looking for a home this is the best part of the process. For others, it’s the most frustrating.

Real estate is a cyclical industry, and when looking for a home, you should be aware of where your timeline falls in that cycle. Once you have your mortgage pre-approval in hand, you have a few months of flexibility, but depending on market forces, that flexibility may or may not work in your favour.

If you’re looking in a market that’s moving very quickly, you might not have the luxury of waiting until your ideal property comes on the market at the ideal time. It’s often the wisest move to just start looking at everything available in your price range and see if you can work with whatever you find. In this scenario, the time of year matters less to you, because prices are typically high, the number of homes on the market is generally low, and a combination of these two factors leads to a lot of competition between people looking for homes – investors and primary homebuyers alike.

If your local housing market is much more balanced, however, then time may be on your side. There are natural highs and lows based on seasonal factors, and pros and cons to buying in each period. 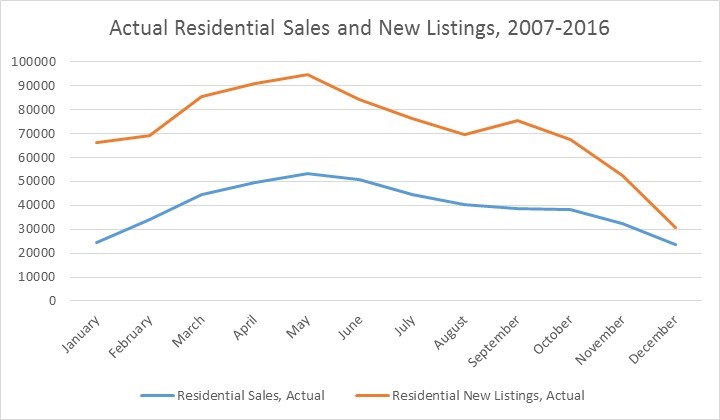 Regardless of the kind of housing market you’re buying – or selling – in, spring is the most popular time for housing activity. It’s almost as if everyone stops hibernating for the winter and welcomes the spring thaw. It’s hard to know what comes first, the sellers who put their homes on the market in anticipation of the buyers, or the throngs of buyers who are ready to flood open houses. Homes tend to present better in the spring than in other times of year, and more people put their homes on the market to sell when it looks its best. Either way, there’s much more activity on the market, resulting in higher home sales overall.

Springtime doesn’t come without its own drawbacks. Although buyers have a greater choice of homes on the market in the spring, and choice typically tends to be a good thing, there are also more people looking. More people looking at available homes means increased competition, and you might end up paying more than you would have paid if you’d bought the home at other times of the year.

Summer tends to be a bit slower in terms of housing market activity because people – buyers and sellers are alike – are often away on vacations or otherwise enjoying the warm weather. But let’s not overlook the importance of the school cycle when it comes to home prices, either. No one wants to disrupt the family routine in the middle of the school year, especially if changing schools is necessary and requires children to leave familiar teachers and friends. In that respect, summer is a great time to move.

There is a second wave of home buying activity in the fall. People are getting back into the swing of things after the dog days of summer and are hoping to get settled into a new home before the weather changes. After all, no one wants to deal with a moving truck and lugging boxes in and out of a house in three feet of snow.

Winter brings the end-of-year holiday season, which is stressful enough for many people without having to worry about preparing a house for sale or getting financing together. And after the holidays, people tend to be a little less willing to spend even more money, not to mention that moving during a Canadian winter is a gamble for decent weather at best and a blizzardy nightmare at worst. On the other hand, people knowing that spring and fall tend to be the best times to sell their homes mean that they may be particularly motivated to sell for whatever reason.

In a tight real estate market such as Toronto, closing on a home during an unpopular season can save you tens of thousands of dollars. Earlier this year, TheRedPin took a six-year analysis of more than 530,000 home sales in the Greater Toronto Area (GTA) and found that the sale price was $43,000 less in January than at any other time of year. Although there aren’t as many listings in the winter months as there are at other times of the year, there are also fewer prospective buyers looking at the properties that are available – and any agent will tell you that as a buyer, you automatically have the benefit of there being less competition to buy a home that you want. You have more flexibility when it comes to the time you need to make a decision, and the potential to bargain harder with the seller because there could be fewer offers on the table.

TheRedPin found that in the GTA, homes sold 30 per cent slower than they did during the spring season, and because homes stay on the market longer, sellers are more highly motivated. People receive job transfers at less than ideal times, not to mention experience unfortunate incidents like death and illness that may cause them to need to sell their house.

While the savings in cost can be attributed to Toronto’s particular housing market and the likelihood that many homes are sold over their asking price during the busier times of the year, the concept of supply and demand plays out in housing markets across the country: “With fewer buyers and less competition, homes in January take longer to sell (an average of 7 days longer versus the calendar year average) and buyers hold the power – driving down prices,” TheRedPin concluded.

In short, if you’re a seller, avoid putting your home up for sale in the winter. If you’re a buyer who’s flexible and you don’t have a specific time frame, think about house-hunting outside of the spring frenzy, and get your mortgage preapproval during the late summer, when you can take advantage of both the fall and winter markets. You could save a lot of stress and money during the process.

If you are on a set timeline, however, don’t despair. There are plenty of tips and techniques that real estate professionals use to make sure that you pay fair market value and that you’re in the best possible position to get the home that you want – regardless of the time of year.