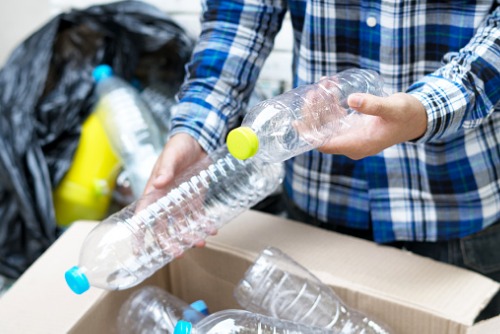 A home built using 612,000 recycled plastic bottles is on the market in Nova Scotia.

Joel German and David Saulnier, founders of JD Composites, unveiled their housing project in Meteghan River earlier this week, and the home is believed to be the first of its kind in the world.

“We decided to give it a go with 100% recycled products from Armacell, a foam producer out of Brampton, Ont.,” Saulnier told CTV News on Wednesday.  “We used their raw product and we designed our [panels] and we were able to pull off a 2,000-square-foot beach house made completely of recycled PET (polyethylene terephthalate) plastic.”

Saulnier said that his crew started designing the home in May 2018 and took about three weeks to laminate the 172 panels the home is constructed from. At the end of September, the team erected the home’s walls in a single day and spent the winter finishing the interior.

The plastic panelling was tested to stand up to extreme weather and withstand 326-miles-per-hour winds, twice a Category 5 hurricane. The panels also act as the insulation for the home, which can maintain its temperature very efficiently.

Saulnier estimates that the energy efficiency of the home will save the homeowner up to $80,000 over 25 years.

As for the asking price, Saulnier said that he’s still “kicking around the numbers.”

“Our price points are very competitive of what’s conventional out there right now,” the builder said. “I think the advantage is not only from the green aspect, saving the environment, of course … I think the price points are going to be very close to conventional construction. However, in a 25-year mortgage, I’m estimating, with conventional energy costs, you can save between $50 to $80,000 in 25 years.”